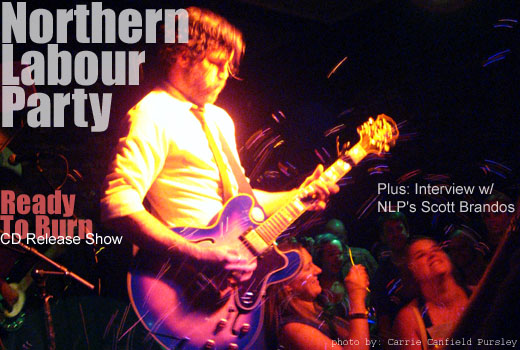 Huntington Beach CA –  Post-Punk rock group, Northern Labour Party, kicked of the release of their new EP, “Ready To Burn”, with a show to a packed audience at Fitzgerald’s Pub on Oct 2.  “Ready To Burn”, released on Ohm’s Law Records, is NLP’s follow up to their 2009 self-titled EP.   HB locals, the well-dressed quartet in their usual assortment of suits, vests, and ties opened their set with “Less Than Three” off the new disc.  The melodic lyrics layered atop the group’s signature synthesized dance beats resembles that of Joy Division, Killers, Interpol and the likes of the post-punk movement.  Their 10 song set included all 5 tracks from “Ready To Burn”, new music, and a cover of Peter Schilling’s “Major Tom”
Monkeyoil Favorites
================
“Less Than Three” – We knew we were in for something special when the synthesizer broke into the bass intro.
“No Escape” – Personal favorite.  If you like the eerie electronic intro of this song on disc, wait till you hear it live.
Also notable: “Just One More Night “, “Major Tom”
Northern Labour Party consists of Scott Brandos on guitars and vocals, Colin Altena on drums, bassist Steve Brown, and Dex McFerson on analogue synthesizers.  If you like Interpol and post-punk music, you will like Northern Labour Party. 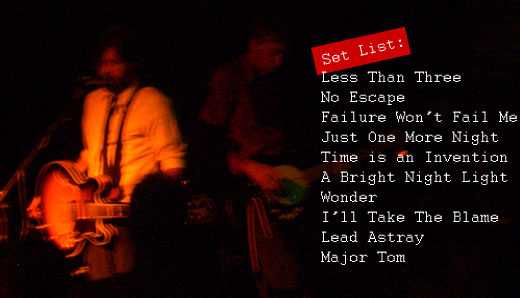 Scott:   We formed as a core band at the end of 2007, and we rounded out with our final member on bass in mid-2008.
MO: How did the members come together?
Scott:  Dex, Colin, and I met through Craigslist. Steve, who had played in a band with Dex previously, was originally tasked with recording the first EP. He was invited to join following the fulfillment.

MO:  Great band name.  How did you guys come up with Northern Labour Party?

Scott:   I want to first clarify that it has nothing at all to do with the Northern Ireland Labour Party. I love the book 1984 by George Orwell and there is a line that I like that says “proles and animals are free”. It was the idea that the working class, although poor and alienated from society, are the only ones who are truly free. This eventually evolved to the “Labour Party” of our band.  The “Northern” part of the name comes from the Northern Soul movement that emerged from the British mod scene in the late 1960’s.   When we set out to make music as Northern Labour Party, we always wanted our music to have an underlying dark feeling that would strike a nerve with anyone who listened yet at the same time be danceable.

MO:  It is easy to simply compare NLP to Interpol, but if you look pass the suits, you guys really are more.  How do you differentiate yourselves from such comparisons and how do you feel about such comparisons?

Scott:   First of all I don’t think anyone in the band would take a comparison to Interpol as a bad thing because we share similar influences and in fact it could almost be seen as a compliment. We take our music seriously and want others to as well. I guess you can say our look is a result of our music. If people want to make connections to other bands that is okay by us.  We like to think our music is unique and stands out when compared to what is currently out there on the local scene.
MO:  Who are your influences?
We all grew up listening to bands from the 80s post punk/new wave movement.  Some of our biggest influences are Joy Division, Depeche Mode, Magazine, Gary Newman, New Order and the list goes on. I think if you were to listen to our music you can hear these influences littered throughout the songs but we do not believe that we sound just like on or the other. Our music is a product of our individual influences coming together to create the sounds of Northern Labour Party.
MO:  What inspires your lyrics?

Scott: All of the songs are referencing real life situations, emotions feeling and events that have happened throughout my life thus far. I guess you can say Northern Labour Party songs are about self doubt, rejection, the looming unknown of time and death…all very uplifting stuff.
MO:   Self doubt?  Rejection?  Time and Death?  Would you mind going through a few of these songs for us.
Scott:  Lets start with our self titled EP. Songs like Failure Won’t Fail Me was written prior to the formation of NLP…actually I wrote it in college when I was going through a time where I felt like I could do nothing right and everything seemed as if it was falling apart.  I think the title of that song kind of sums up what it is about. The Unknown lyrically is about the not knowing when or where or how you will go and thinking about what happens after that…In this song death is portrayed by a woman who is almost stalking you until she wins.
Now on to our new EP “Ready to Burn” the song Just One More Night is not the looming unknown of death but about the tragedy of it. A few years ago a friend of mine from high school’s sister passed away in a car accident.  It affected me and I kept thinking about what it must have felt like to be in my friend’s shoes.  Just One More Night was a song written from the perspective of the ones left behind.  I’ll Take the Blame is a standard song about the end of a relationship…everything is falling apart and it just spirals down until there is nothing left but resentment and finger pointing…in this case I guess I am pointing my finger at myself.
MO:  Sounds very personal.  Do you write all the lyrics?
Scott:  I write the lyrics for the most part.   Now, don’t get me wrong, the whole band gives input when creating a melody or if certain words or lines do not seem to be working with what we are doing musically. In the past I have tried to force lyrics for a song and it never seems to work.  I only write when the mood strikes me and then I don’t really think about it too much and I just let the ink run to the paper.

Funny story, there was a period when I was not writing very much and we had some new songs that needed some lyrics. Dex said “here is what you are going to do…walk outside and wait until you see the best looking girl around.   Then, go ask her out…when she says no, go home turn off the lights, cry a little bit and then write a new song”
MO:  Great story.  Did you follow his advise?  Did a song result from it?

Scott:   [haha] I can neither confirm nor deny this… but lets be honest, if I did follow through she probably would have said yes and NLP songs would end up being about gumdrops and butterflies.

Scott: Honestly we just want to keep writing new songs and our goal is to have the songs get stronger and stronger as time goes on. Music is a huge part of all of our lives and we all love playing it.   Our music although can be viewed as dark or at times depressing lyrically is a positive outlet for all of us and keeps us all somewhat sane in this crazy world.  We just want to share our songs with as many people as possible and we hope that people will enjoy what they hear. As far as big picture plans we would love to set out arenas around the world but for now we are happy playing to 5 people if we can connect with them and give them a performance that they can remember us by.
For more information:
http://www.northernlabourparty.com